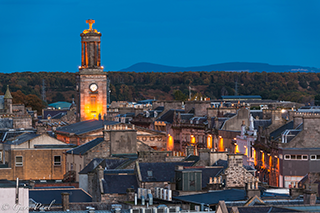 Ladyhill is a late 11th or early 12th century earthwork motte and bailey fortress, which was mentioned in a 1160 charter of King Malcolm IV. Built from a natural hillock,a north-western finger of raised ground projects from the lower slopes to form a possible bailey. In 1296 and 1303 during the Wars of Independence, King Edward I occupied the castle, which was taken and destroyed by the Scots in 1308. Never rebuilt, the motte is crowned by the remnant of eastern wall cores, which may represent the remains of a tower or the Chapel of Our Lady. The castle was defended by scarping or terracing to the natural slope and an outer northern stone-based earthen rampart, with a timber revetment or palisade to the fore. The building of a demolished Observatory and the 1839 memorial column to George, 5th Duke of Gordon has considerably mutilated the summit with hollows. Wall footings on the southern and eastern slopes, are probably the remains of 19th century revetments. 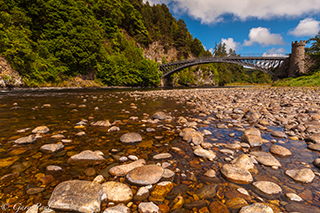 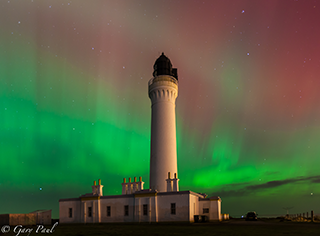 Scotland’s famous for many sightings, but right here in Moray you can see lighting up skies the Aurora Borealis. Better known as the Northern Lights spectacular displays can be seen during the clear winter months, early spring and late Autumn.

Randolph's Leap is an site of special interest and area of countryside in Moray, Scotland. The area surrounds the River Findhorn and is actually named after the point at the river where the sheer rock banks are closest, where according to legend an ancient chief known as Randolph was chasing a Comyn, who jumped to the other side and escaped back to his castle. The Comyn castle fell and the lands were turned over to Randolph and the name gradually changed from Comyn's Leap to Randolph's Leap. The nearest settlement is Logie Steading, a steading from where walks along the side of the river can be taken. This part of the Findhorn is renowned for its dramatic rocks, cliffs and waterfalls, and peaceful surrounding pine forest. Randolph's Leap is also an important wildlife area, with lesser black-backed gulls, woodpeckers and red squirrels. 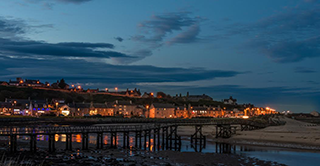 Lossiemouth Beach is a large strip of dunes separated from the rest of the town by the River Lossie, creating a useful sheltered expanse of water. The town looks down onto this natural harbour with a plain promenade street from which there is a long wooden footbridge leading onto the sands. Ringed plover, grey heron, black-headed gull, oystercatcher, curlew, mallard and other waders feed under the bridge and are easy to watch from the street, and there are vast numbers of water birds in the more rural area further east.