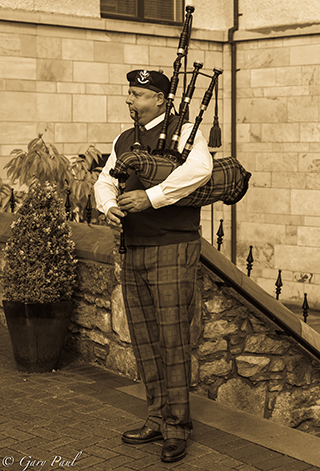 Born and bred Elgin man. His family reaches back 5 generations in the local area. As a young boy Garey learned to play the pipes and to this day continues to use his talent to entertain locals and visitors to the area… His highlight so far being asked to pipe  ‘Elgin’ into the millennium year. Guvnor regularly plays the pipes at the very start of a football match to support his local football team Elgin City, which he says is well worth a look if your in the area and receive a warm welcome.

I’ve Traveled Around at Home and Abroad,
Seen Many A City, Tramped Many A Road.
But In All My Wide World No Place Can Compare,
With Elgin My Elgin The Fairest Of Fair.
Elgin My Elgin, The Land of My Birth,
Close By The Shores, Of The Great Moray Firth.
Elgin My Elgin I’m Wishful, To Be On The Banks,
'O The Lossie, Six Miles Fae The Sea.

Elgin City, Giants Of The North

High on the hill the Duke looks down on this famous football ground, home of legends to many to name gave their hearts in every game, Elgin City what a team on the banks of the Lossie and Lossie Green, giant's of the north they will always be next to my river flowing to the sea.

In his early days of playing the bagpipes and still learning.

One morning he was out playing a tune by the old cathedral next to the river Lossie, he was playing away but never realised that he had an audience watching him. He stopped and said hello and a voice said how's it going buddy? you ain't been playing those pipes for too long. Guvnor explained he was just learning and been playing for less than a year.

Guvnor put his pipes away and started walking home when the American asked: When was that old Cathedral built? Guvnor replied, well, it wasn't there this morning!